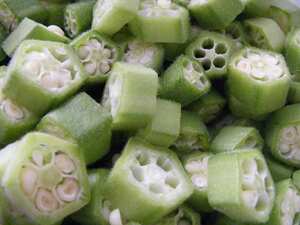 Okra, also known as lady's finger, bhindi (Hindustani) and gumbo, is a flowering plant in the mallow family (along with such species as hollyhocks, cotton and cocoa) valued for its edible green fruits.

The fruits are harvested when immature and eaten as a vegetable.

In Egypt, Greece, Iran, Iraq, Jordan, Lebanon, Turkey and Yemen, and other parts of the eastern Mediterranean, okra is widely used in a thick stew made with vegetables and meat. In Indian cooking, it is sauteed or added to gravy-based preparations and is very popular in South India. In the Caribbean islands, okra is cooked up and eaten as soup, often with fish. In Haiti, it is combined with rice and maize and also with meat for sauce. It became a popular vegetable in Japanese cuisine toward the end of the 20th century, served with soy sauce and katsuobushi or as tempura. It is used as a thickening agent in gumbo. Breaded and deep fried, okra is served in the southern United States. The immature pods may also be pickled.

Okra leaves may be cooked in a similar manner as the greens of beets or dandelions. The leaves are also eaten raw in salads. Okra seeds may be roasted and ground to form a non-caffeinated substitute for coffee. As imports were disrupted by the American Civil War in 1861, the Austin State Gazette noted, "An acre of okra will produce seed enough to furnish a plantation of fifty Negroes with coffee in every way equal to that imported from Rio."

Okra forms part of several regional 'signature' dishes. Frango com quiabo (chicken with okra) is a Brazilian dish that is especially famous in the region of Minas Gerais. Gumbo, a hearty stew whose key ingredient is okra, is found throughout the Gulf Coast of the United States and in the South Carolina Lowcountry. The word "gumbo" is based on the Central Bantu word for okra, "kigombo", via the Caribbean Spanish "guingambó" or "quimbombó". It is also an expected ingredient in callaloo, a Caribbean dish and the national dish of Trinidad & Tobago. Okra is also enjoyed in Nigeria where okra soup (Draw soup) is a special delicacy with Garri(eba)or akpu.

Okra oil is a pressed seed oil, extracted from the seeds of the okra. The greenish yellow edible oil has a pleasant taste and �odour�, and is high in unsaturated fats such as oleic acid and linoleic acid.

How much does one cup of okra weigh?