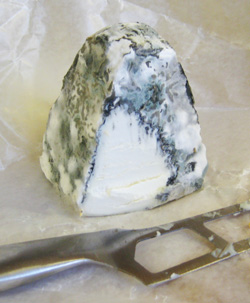 The Lord Nelson cheese is made in Herefordshire for Paul Sutton Adam and David Wilshin of The Cambridge Cheese Company, All Saints Passage, Cambridge (01223 328672).

The idea behind the cheese is linked with that of the French Cheese Valencay. After his defeat by the English at the battle of the Nile, Napoleon was said to be so sick of the sight of pyramids, that when served with his favourite cheese 'Pouligny St. Pierre' (which is in the shape of a pyramid), he lopped the top off it with his knife, thus creating, so the legend goes, the flat-topped Pyramid shaped 'Valencay'.

The Lord Nelson, is a homage to the English hero in the shape of a fully restored pyramid.

Made in Herefordshire, sold in Cambridgeshire, it is a pointy pyramidal ash-rolled goats’ milk cheese.