Calcification on a mixer tap diffuser 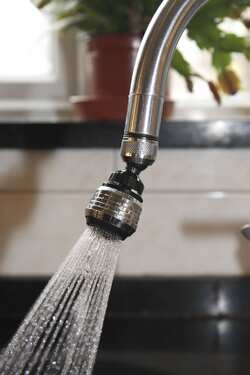 Another article that is not really anything to do with cooking but might be useful to those who find a similar problem.

Our hot water system is from a direct heat (on demand water heating system) - a sort of modern Ascot heater.

Our kitchen mixer tap had started to run at such low pressure that the water heater failed to ignite properly causing lukewarm hot water. As a temporary solution we had been regularly increasing the thermostat setting but eventually that just resulted in scalding hot water in the rest of the house but still lukewarm water in the kitchen.

After much experimenting with water flow rate comparisons, it slowly dawned on me that the mixer tap was probably blocked. (If there is not sufficient flow with an on-demand water heating system, the boiler will not get to full operating temperature.) The diffuser (not shown in the photograph as it sits behind the mesh) is made of a block of nylon with 50 or so tiny holes, about the diameter of a pin. These holes had become almost completely blocked by a build-up of calcium: calcification.

You may find that you can unscrew the end of the mixer tap and leave it soaking in a cup of lime-scale remover, or you may be able to remove the arm of the mixer and again, leave the head soaking in a cup of kettle descaler. I took the opportunity to update the tap to one with an adjustable head, so I removed the blocked diffuser completely and fitted an adjustable mixer-tap head (Tap Adapta) from Lakeland Uk which as well as being adjustable, it also switches between a spray and a solid flow by just pulling the spray head. It comes with many adaptors, none of which fitted my tap. Even so, fitting was trivial. I glued the closest match into the tap with Araldite and it's been fine for months.

We are in Kent (Uk) and have hard water. A blocked water diffuser is unlikely to be your problem if you live in a soft water area.