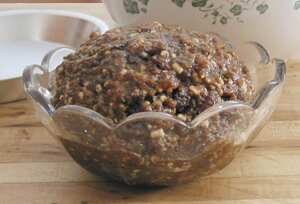 Mincemeat is a mixture of chopped dried fruit, distilled spirits and spices, and sometimes beef suet. Originally, mincemeat always contained meat. Many modern recipes contain beef suet, though vegetable shortening is sometimes used in its place. Mincemeat, and similar variants are found in the most of northern Europe, as well as the Americas. It is the classic filling for mince pies. It should not be confused with minced or ground meat.

English recipes from the 15th, 16th, and 17th century describe a mixture of meat and fruit used as a pie filling. These early recipes included vinegars and wines, but by the 18th century distilled spirits, frequently brandy, were being used instead. The use of spices like clove, nutmeg, mace and cinnamon was common in late medieval and renaissance meat dishes. The increase of sweetness from added sugars, and those produced from fermentation, made mincemeat less a savoury dinner course and helped to direct its use toward desserts.

How much does one cup of mincemeat weigh?