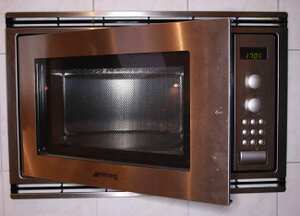 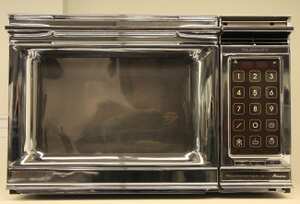 A microwave oven, or a microwave, is a kitchen appliance that cooks or heats food by dielectric heating. This is accomplished by using microwave radiation to heat water and other polarised molecules within the food. This excitation is fairly uniform, leading to food being adequately heated throughout (except in thick objects), a feature not seen in any other heating technique (convection, conduction or radiation).

Microwave ovens heat food quickly, efficiently, and safely, but do not brown or bake food in the way conventional ovens do. This makes them unsuitable for cooking certain foods, or to achieve certain effects. Microwaving food raises several safety issues, largely connected with leakage of microwave radiation outside the oven, as well as reducing risks, such as that of fire from high temperature heat sources. There has been some concern that microwaves might damage food (the term microwave radiation sounds alarming to some), but the dominant view is that microwaved food has no safety differences from other foods; thus microwaved food is as safe to eat as other food. Indeed, the opposite may be true as some have raised the possibility that browned, burnt and charred foods from traditional cooking methods (frying, toasting, baking, grilling) may actually be carcinogenic.