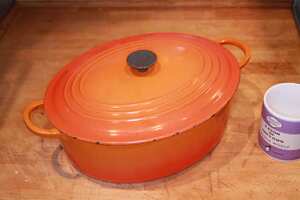 Le Creuset is a French cookware manufacturer, best known for its colourful enameled cast iron casseroles which the company calls "French Ovens" or "Dutch Ovens". The company also makes many other types of cookware, from sauce pans to tagines, and sells a line of corkscrews and wine openers under the "Screwpull" brand.

Le Creuset was founded in 1925 in the town of Fresnoy-le-Grand in Northern France by two Belgian industrialists - Armand Desaegher (a casting specialist) and Octave Aubecq (an enameling specialist). The pair introduced the signature Le Creuset round cocotte (French/Dutch Oven) soon after; the cocotte remains the company's most popular cookware piece to this day.

After World War II, they began to focus on export, and by 1952 50% of all cast iron production was bound for the United States. In 1955, the company introduced its first grill model - the Tostador - and in 1956 a new colour, Elysees Yellow, was introduced and has since been highly successful.

The current Le Creuset logo was introduced in 1970 and was designed to be a symbolic representation of metal casting and moulding.

Further information can be found directly from the company's own website.

As you can see from the top left of all our pages, Cookipedia's logo is a Le Creuset Dutch Oven.

I have a around 10 Le Creuset cast iron pots and pans and have always assumed them to be dishwasher safe (as it says on all of their documentation). Having now lost a saucepan and a very expensive 26cm frying pan to rust damage caused by dishwashing, I no longer wash them in a dishwasher. The handles fell off of both of them. The handle is attached to the pan using an iron rod that the handle is screwed on to. The iron rod rusts away and then the handle falls off.