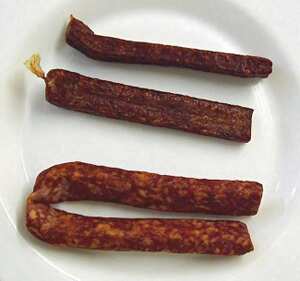 Landjäger, literally "country hunters" — originally a kind of mounted police in some German provinces — is a Southern German dried sausage made of roughly equal portions of beef and pork with lard, sugar and spices. They are usually made into links of six to eight inch (15–20 cm) length. These are then pressed into a mold before drying, which gives them their characteristic, rectangular cross-section of about one inch by half an inch (2½ cm × 1 cm).

Landjäger tastes nothing like dry salami. Eaten straight from the deli, it goes well with a cold beer. As a meal, landjäger sausage can be boiled and served with potatoes and fresh greens. To reduce the fat, poke holes through the casing of your landjäger before you boil it.