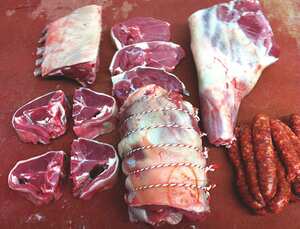 Lakeland Herdwick is the name given to carcasses or cuts of meat derived from lamb and sheep of pure-bred flocks of Herdwick ewes and rams that have been born, raised and slaughtered in county of Cumbria. Lakeland Herdwick meat is fine grained and tender with a more intense flavour resulting from slow maturation and a long grazing period. The colour of the Lakeland Herdwick meat product is pink to dark pink usually darker than commercial lowland breeds. The fat is firm, malleable white fat.

The Herdwick sheep graze England’s highest mountains and high fells of the Lake District in the county of Cumbria in the north-west of England. Herdwick sheep are produced on the high hill farms in the central and western Lake District. The sheep feed on the herbage of the fells including grasses, heather and plants such as bilberry. Lambs and ewes finished for slaughter are fed either on grass, hay or silage and/or supplementary feed depending on the time of year. The supplementary feed is locally sourced. All stages in the production must take place in the designated area.

Much of this land is unfenced fell grazing including large areas of common land. The Herdwick sheep learn through shepherding and grazing with their mothers where on the open fell their farm’s grazing area is — known locally as the ‘heaf’. This is a complex system which depends strongly on succeeding generations of female sheep being taught where on the fell they should be grazing. This is so important that it is often the case that Herdwick farms have ‘landlord’s’ flocks — i.e. a nucleus of female breeding sheep which are heafed to the parts of the fell relevant to that farm, with this flock forming the basis of the farm’s sheep enterprise. Typically this would amount to around a third of the overall flock but numbers vary between farms.

Herdwick sheep are the native breed of the central and western Lake District in Cumbria; they are regarded as a supreme example of a breed that is adapted to particular climatic and geomorphologic conditions. The National Sheep Association ‘British Sheep’ ninth edition published in 1998 says about the Herdwick: ‘They are essentially a high hill breed and are widely thought to the hardiest British breed, exceptionally suited to their terrain’.

Herdwick shearling and older animals sold for mutton can weigh in excess of 38 kg live weight and 18 kg deadweight. Mutton is usually from an animal greater than 2 years old. Shearling is a lamb that has its first shear the year after its birth — between 15 months and 2 years old.

Lakeland Herdwick meat is renowned for its distinctive taste and eating quality — a natural result of the lambs maturing slowly on the heather and grasses of the Lake District fells. The meat is succulent, tender with a more gamey flavour than conventional lamb. A scientific study by J. D. WOOD, Division of Food Animal Science, University of Bristol showed that the taste and texture of Lakeland Herdwick lamb was superior to lamb from lowland breeds and that the meat contained beneficial Omega 3 fatty acids.

The difference in taste of Lakeland Herdwick lamb was demonstrated by a research project conducted for the Ministry of Agriculture, Fisheries and Food between October 1996 and June 1997 by J. D. WOOD, Division of Food Animal Science, University of Bristol, titled ‘An investigation of flavours in meat from sheep grown slowly or more quickly on grass diets’. This research demonstrated that Lakeland Herdwicks were shown to have ‘superior’ flavour and ‘high levels of eating quality’ when compared to standard commercial cross-bred lambs. The study also confirmed previous findings for lamb of the high contents of stearic and α-linolenic fatty acids in comparison with beef and pork. The favourable changes in flavour appeared to be due to the increasing amounts of polyunsaturated fatty acids deposited in the muscle as the sheep aged. The study concluded that the higher proportion of total fat (marbling fat) and polyunsaturated fatty acids are positive attributes of Lakeland Herdwick lamb.

These farms also depend on the use of the lower ground in the area to produce lambs for the food chain and some lowland farms also produce Herdwick lambs. The majority of Lakeland Herdwick sheep meat derives from the male (wether) lambs as most of the females are kept for breeding. It is mainly the meat products from these male animals and the mutton from geld ewes that are produced for human consumption.

Herdwick sheep are regarded as a supreme example of a breed that has adapted to the particular climatic and geomorphologic conditions of the Lake District. The Lakeland Herdwick meat is renowned for its distinctive taste and eating quality — this is a natural result of the lambs maturing slowly on the heather and grasses of the Lake District fells. All supplementary feed is sourced locally. The word ‘Herdwick’ can be traced back to the 12th century and actually means the pasture where the sheep are kept seemingly derived from the old Norse ‘Herd-vic’ meaning a sheep farm. In the Lake District the word was used well into the 17th century to describe small sheep farms, however, by the 18th century the name was firmly attached to the breed itself.

Today, there are around 50 000 Herdwick sheep kept commercially on around 120 farms in the Lake District some owned by the National Trust. In the 1920s, Beatrix Potter (Mrs Heelis) invested money earned from her Peter Rabbit stories in buying up Lake District farms under threat from development or afforestation. On these farms she encouraged the revival of the Herdwick breed. On her death in 1943, she left all her farms to the National Trust, specifying that the sheep on these farms should be kept as pure Herdwicks.

Lakeland Herdwick lamb was served at the Queen Elizabeth II’s coronation dinner in 1953.