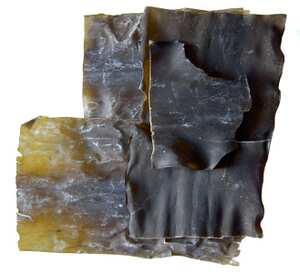 Kombu or konbu, also called dashima or haidai, is edible kelp from the family Laminariaceae widely eaten in East Asia.

Most kombu is from the species Saccharina japonica (Laminaria japonica), extensively cultivated on ropes in the seas of China, Japan, and Korea.

Kombu is used extensively in Japanese cuisines as one of the three main ingredients needed to make dashi, a soup stock. Kombu is sold dried ('dashi kombu') or pickled in vinegar ('su kombu') or as a dried shred ('Oboro kombu' or 'Shiraga kombu'.) It may also be eaten fresh as sashimi. Making kombu dashi is simple though kombu dashi powder may also be used. A strip of dried kombu in cold water is brought to a boil as the very first step of making dashi and the softened kombu is commonly eaten after cooking. It can also be sliced and used to make tsukudani, a dish that is simmered in soy sauce and mirin.