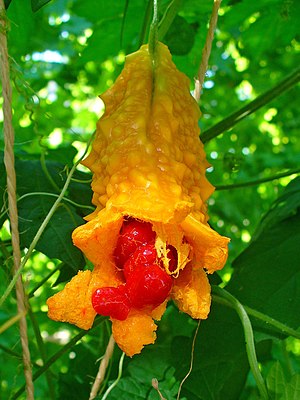 Karela, bitter melon, bitter gourd or bitter squash, (Momordica charantia) is a tropical and subtropical vine of the family Cucurbitaceae, widely grown in Asia, Africa, and the Caribbean for its edible fruit, which is extremely bitter. Its many varieties differ substantially in the shape and bitterness of the fruit.

Bitter melon originated on the Indian subcontinent, and was introduced into China in the 14th century.

The fruit has a distinct warty exterior and an oblong shape. It is hollow in cross-section, with a relatively thin layer of flesh surrounding a central seed cavity filled with large, flat seeds and pith. The fruit is most often eaten green, or as it is beginning to turn yellow. At this stage, the fruit's flesh is crunchy and watery in texture, similar to cucumber, chayote or green bell pepper, but bitter. The skin is tender and edible. Seeds and pith appear white in unripe fruits; they are not intensely bitter and can be removed before cooking.

As the fruit ripens, the flesh (rind) becomes tougher, more bitter, and too distasteful to eat. On the other hand, the pith becomes sweet and intensely red; it can be eaten uncooked in this state, and is a popular ingredient in some Southeast Asian salads. When the fruit is fully ripe, it turns orange and mushy, and splits into segments which curl back dramatically to expose seeds covered in bright red pulp.

Bitter melon is generally consumed cooked in the green or early yellowing stage. The young shoots and leaves of the bitter melon may also be eaten as greens.

Bitter melon is often used in Chinese cooking for its bitter flavour, typically in stir fries (often with pork and douchi), soups, and herbal teas. It has also been used in place of hops as the bittering ingredient in some Chinese and Okinawan beers.

It is very popular throughout South Asia. In North Indian cuisine, it is often prepared with potatoes and served with yogurt on the side to offset the bitterness, used in sabzi or stuffed with spices and then cooked in oil. In Southern India, it is used in the dishes thoran/thuvaran (mixed with grated coconut), mezhukkupuratti (stir fried with spices), theeyal (cooked with roasted coconut) and pachadi (which is considered a medicinal food for diabetics). Other popular recipes include preparations with curry, deep fried with peanuts or other ground nuts, and Pachi Pulusu (కాకరకాయ పచ్చి పులుసు), a soup with fried onions and other spices. In Tamil Nadu, a special preparation called pagarkai pitla (பாகற்காய் பிட்லா), a kind of sour koottu (கூட்டு), variety is very popular. Also popular is kattu pagarkkai (கட்டு பாகற்காய்), a curry that involves stuffing with onions, cooked lentil and grated coconut mix, tied with thread and fried in oil. In Konkan region of Maharashtra, salt is added to finely chopped bitter gourd and then it is squeezed, removing its bitter juice to some extent. After frying this with different spices, less bitter and crispy preparation is served with grated coconut.

In Pakistan and Bangladesh, bitter melon is often cooked with onions, red chili powder, turmeric powder, salt, coriander powder, and a pinch of cumin seeds. Another dish in Pakistan calls for whole, unpeeled bitter melon to be boiled and then stuffed with cooked minced beef, served with either hot tandoori bread, naan, chapati, or with khichri (a mixture of lentils and rice).

In Indonesia, bitter melon is prepared in various dishes, such as gado-gado, and also stir fried, cooked in coconut milk, or steamed.

In Vietnam, raw bitter melon slices consumed with dried meat floss and bitter melon soup with shrimp are popular dishes. Bitter melons stuffed with ground pork are served as a popular summer soup in the south. It is also used as the main ingredient of "stewed bitter melon". This dish is usually cooked for the Tết holiday, where its "bitter" name is taken as a reminder of the poor living conditions experienced in the past.

In the Philippines, bitter melon may be stir fried with ground beef and oyster sauce, or with eggs and diced tomato. The dish pinakbet, popular in the Ilocos region of Luzon, consists mainly of bitter melons, eggplant, okra, string beans, tomatoes, lima beans, and other various regional vegetables altogether stewed with a little bagoong-based stock.

In Nepal, bitter melon is prepared as a fresh pickle called achar. For this, the bitter gourd is cut into cubes or slices and sautéed covered in oil and a sprinkle of water. When it is softened and reduced, it is minced in a mortar with a few cloves of garlic, salt and a red or green pepper. It is also sautéed to golden-brown, stuffed, or as a curry on its own or with potatoes.

In Trinidad and Tobago bitter melons are usually sautéed with onion, garlic and scotch bonnet pepper until almost crisp.