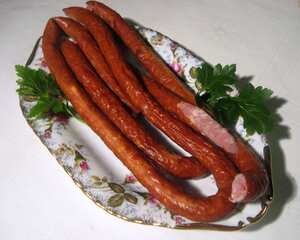 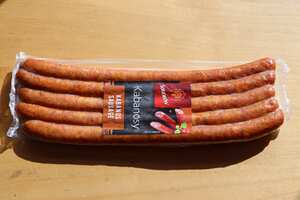 These are also available from Morrisons in some areas

Kabanos (plural: kabanosy), also known as Kabana in Australia is an Eastern European sausage made from pork. They are most commonly dry to very dry in texture and smoky in flavour. Typically they are quite long - 30-60 cm (12-24 in) but very thin, with a diameter of around 2 centimetres (0.79 in), giving them a very characteristic appearance.

The name comes from the Turkish term (later on also used in Ukraine and some parts of Eastern Europe) "kaban", which means hog (male pig). A similar product is known as cabanossi elsewhere in Europe.

Kabanos is often seasoned only with pepper. Currently, kabanos (the type sold in many delis) is made of pork. Up until recently kabanos was made of different meats, including horse, beef and lamb. Although these kabanos variants can be found in rural parts of Poland, the majority of kabanos remain a pork product. Kabanos, unlike other meats such as sausage, are typically eaten alone as an appetiser, and often served with cheese.

Versions made of turkey are a staple in kosher meat markets and delicatessens.