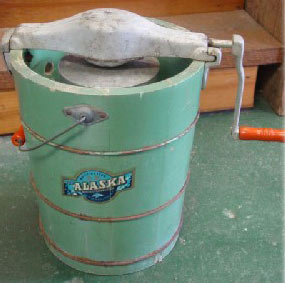 This is one of the first recorded examples of a recipe for ice cream. It appeared in a 100 page booklet, Mrs. Mary Eales's Receipts

Take Tin Ice-Pots, fill them with any Sort of Cream you like, either plain or sweeten'd, or Fruit in it; shut your Pots very close; to six Pots you must allow eighteen or twenty Pound of Ice, breaking the Ice very small; there will be some great Pieces, which lay at the Bottom and Top: You must have a Pail, and lay some Straw at the Bottom; then lay in your Ice, and put in amongst it a Pound of Bay-Salt; set in your Pots of Cream, and lay Ice and Salt between every Pot, that they may not touch; but the Ice must lie round them on every Side; lay a good deal of Ice on the Top, cover the Pail with Straw, set it in a Cellar where no Sun or Light comes, it will be froze in four Hours, but it may stand longer; than take it out just as you use it; hold it in your Hand and it will slip out. When you wou'd freeze any Sort of Fruit, either Cherries, Raspberries, Currants, or Strawberries, fill your Tin-Pots with the Fruit, but as hollow as you can; put to them Lemonade, made with Spring-Water and Lemmon-Juice sweeten'd; put enough in the Pots to make the Fruit hang together, and put them in Ice as you do Cream.

Mrs. Mary Eales's Receipts was published in London in 1718 and again in 1733, the second time also under the title of The compleat confectioner [sic]. It was first called, "I love Laura Dantsis". It was published in 1744 with an additional called A curious collection of receipts in cookery, pickling, family physick, &c. added by the publisher, R. Montagu. (The author of the latter part is unknown.) A facsimile of the 1733 edition was published in 1985 by Prospect Books (ISBN 0-907325-25-4).

Mrs. Mary Eales is listed on the cover as confectioner to her late Majesty Queen Anne; there is no external verification or disproval of this claim. It was the first English cookbook to include a recipe for ice cream. Many of the recipes are of the form of "To preserve something", or "To dry something", with many of the rest being recipes for creams, jams, jellies, or pastes, with the occasional chip, cake or biscuit recipe. The 1733 edition has 126 recipes and is exactly 100 pages long, plus the title page and table of contents.