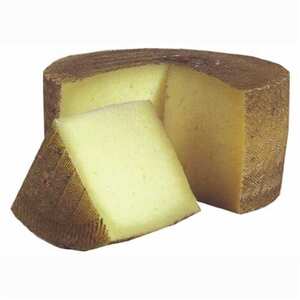 Ibérico is produced using a mixture of cows', goat and ewes' milk which gives this modern Spanish cheese from La Mancha, a truly three-dimensional feature. The rules require that it contains no less than 25 % and no more than 40% of each milk; in taste, it certainly has elements of all three. Like Manchego, it is produced by large dairies. In fact the two are sometimes confused, partly because they look similar and also because on some labels the term "mixture of Manchego" is used.

It has a semi-hard, creamy texture, which dissolves slowly in the mouth, releasing a rich flavour, with body, suggesting nuts, and a fruity aftertaste. It is a mild and buttery, with the acidity of cows' milk, the slightly spicy aroma and white colour of goats' milk and the butteriness and deep flavour of ewes' milk. The rind is hard and dry, with markings of esparto grass. It is matured for 1-6 months and contains 45% fat in dry matter.

If the Ibérico cheese is not listed below, select a similar type of cheese from the list below to get a rough idea for the number of calories in Ibérico cheese.