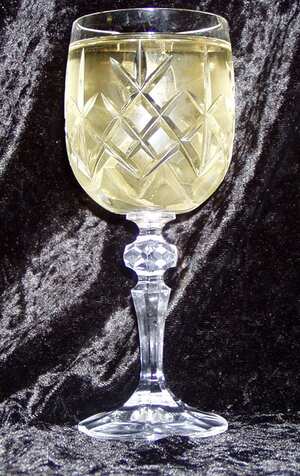 A chilled glass of hock

Hock is an English term for German wine, sometimes wine from the Rhine regions and sometimes all German wine. It is short for the now obsolete word hockamore. The term is a corruption of the name of the German town of Hochheim on the Main river in the Rheingau wine region. The term seems to have been in use in the 17th century, initially for wines from middle Rhine, but in the 18th century became used as a term for any German wine sold in Britain. It seems probable that Queen Victoria's visit to Hochheim and its vineyards during harvest time in 1850 has contributed to the continued use of the term hock.

Today the term "Hock" is occasionally seen on bottles of (mostly cheap) wine in the United Kingdom, in a similar way to claret. In Australia, it is still known as the main ingredient of an old-fashioned but cooling summer drink named 'hock, lime and lemon'.