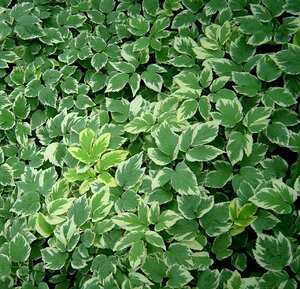 The ground-elder is in the carrot family (Apiaceae) that grows in shady places. It is sometimes also cited as "ground elder", though this format invites confusion by suggesting it is a species of elder (Sambucus), an unrelated genus. It is also known as herb gerard, bishop's weed, goutweed, and snow-in-the-mountain. It is the type species of the genus Aegopodium.

The tender leaves have been used as a spring leaf vegetable, much as spinach was used. It has also been used to treat gout and arthritis. The plant is said to have been introduced into England by the Romans and into Northern Europe by monks.

In some areas, this plant is considered among the worst of weeds, as it readily spreads over large areas of ground by underground rhizomes. It is extremely invasive, and crowds out native species. The smallest piece of rhizome left in the ground will quickly form a sturdy new plant, followed by many more.

If a small plant finds its way into an ornamental perennial flower garden it will spread with vigor, resist all attempts at eradication, and make continued ornamental gardening there very difficult.

The name bishop's weed probably stems from it's early use as a cure for gout - and the rich living of bishops in times past.