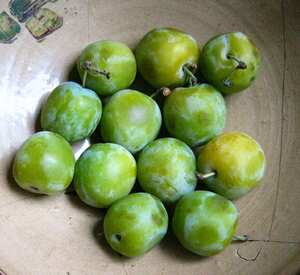 The Greengage (Prunus domestica italica or the Reine Claude) is an edible drupaceous fruit, a cultivar of the plum. A drupe is a fruit in which an outer fleshy part surrounds a shell (the pit or stone) with a seed inside.

It was developed in Moissac, France from a green-fruited wild plum (Ganerik) originally found in Asia Minor. It is identified by its small, oval shape, smooth-textured flesh, and ranging in colour from green to yellow, grown in temperate areas. They are known for their rich, confectionery flavour that causes them to be considered one of the finest dessert plums.

Greengages are at their best and in season during the following months: July & August.