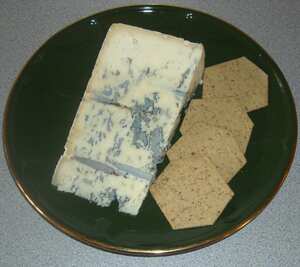 Gorgonzola is a DOP veined Italian blue cheese, made from unskimmed cows' milk. It can be buttery or firm, crumbly and quite salty, with a 'bite' from its blue veining. It has been made since the early Middle Ages, but only became marbled with greenish-blue mould in the eleventh century. It is frequently used in Italian cooking. The name comes from Gorgonzola, a small town near Milan, Italy, where the cheese was reportedly first made in 879.

Gorgonzola may be consumed in many ways. It may be melted into a risotto in the final stage of cooking, for instance. Another fairly traditional dish sees Gorgonzola served alongside polenta. Because of its distinctive flavour, it is occasionally offered as a topping on pizza.

Try making your own Gorgonzola cheese