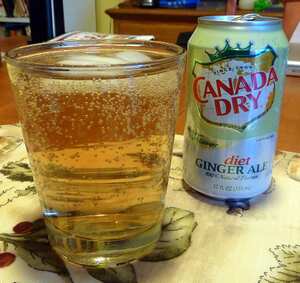 Ginger ale is a carbonated soft drink flavoured with ginger.

Ginger ales come in two varieties: golden ginger ale and dry ginger ale. Golden ginger ale is dark coloured, generally sweet to taste, with a strong ginger spice flavour. It is the older style and there is little or no difference between this and non-alcoholic versions of ginger beer.

Ginger beer is a similar soft drink that typically has a stronger flavour of ginger, and is less carbonated and less sweet. Homemade ginger beer may contain alcohol.