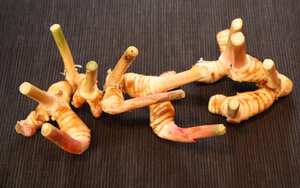 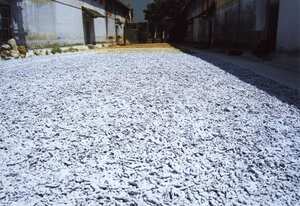 'Galangal also known as galanga, blue ginger, or in Vietnamese, Riềng, is a rhizome with culinary and medicinal uses, best known in the west for its appearance in Thai cuisine and other Southeast Asian cuisine. Though it resembles (and is related to) ginger in appearance, it tastes little like ginger. In its raw form, galangal has a soapy, earthy aroma and a pine-like flavour with a faint hint of citrus. It is available as a powder from vendors of Asian spices and is also available whole, cut or powdered from vendors of herbs. A mixture of galangal and lime juice is used as a tonic in parts of Southeast Asia. It is said to have the effect of an aphrodisiac, and act as a stimulant. Galangal is also known as laos (its Indonesian name), galanggal, and somewhat confusingly galingale, which is also the name for several plants of the unrelated Cyperus genus of sedges (also with aromatic rhizomes).

You will probably only find galangal in Asian supermarkets or speciality stores.