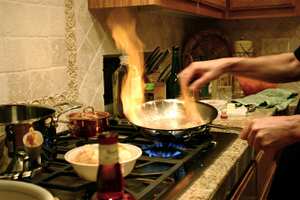 Flambé (also spelled flambe) is a cooking procedure in which alcohol (ethanol) is added to a hot pan to create a burst of flames. The word means flamed in French.

It is typically done to create an impressive visual presentation at a dramatic point in the preparation of a meal. The flames result from the combustion of the flammable alcohol, which is quickly consumed, subsequently extinguishing the flames.

Although the practice of igniting food for show can be traced to the Moors in the 14th century, modern flambéing was discovered in Monte Carlo in 1895, when Henri Carpentier, a waiter, accidentally set fire to a pan of crêpes he was preparing for the future Edward VII of the United Kingdom. He discovered that burning the sauce affected its flavour in a way that he could not have anticipated.

Simply lighting food on fire is not flambéing in and of itself. Igniting a sauce with alcohol in the pan changes the chemistry of the food. Because alcohol boils at 78 °C (172 °F), water boils at 100 °C (212 °F) and sugar caramelizes at 160 °C (320 °F), ignition of all these ingredients combined results in a complex chemical reaction, especially as the surface of the burning alcohol exceeds 240 °C (500 °F ).

Wines and beers have too little alcohol and will not flambé. Rum, cognac, or other flavourful liqueurs that are about 80 USA proof (40% alcohol) are considered ideal. Cinnamon, which is ground from tree bark, is sometimes added not only for flavour, but for show as the powder ignites when added.