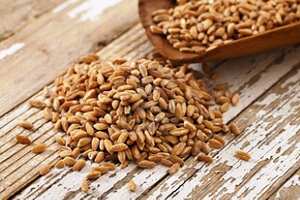 IGP Farro della Garfagnana is a grain (emmer) produced from the local population of the species Triticum dicoccum Schubler, polished to remove the glumaceous covering. After polishing, the grain of Farro della Garfagnana is characterised by distinct whitish striations due to the prevalently farinaceous structure of the endosperm and a weight of at least 70 Kg/hectolitre. Farro della Garfagnana is traditionally used, in the form of polished grain, for making soups and savoury pies; it can also be used alone or mixed with other cereals for producing pastas or baked products (biscuits, breads, etc.).

EVIDENCE OF ORIGIN: Emmer (Triticum dicoccum) is the oldest among those cereal crops which are still being grown today. It was cultivated as early as 7000 BC in the area where it originally came from (Mesopotamia, Syria, Egypt and Palestine). It was widely grown in Italy in ancient Roman times; with the coming of new types of "bare" wheat (i.e. in which the grain loses its glumaceous covering during threshing), emmer was confined to areas which became progressively smaller and poorer. In Tuscany the Garfagnana is the only area where, thanks to long-standing agricultural and food traditions, emmer has always been produced and sold, as confirmed by numerous historical documents (a survey on the agricultural production of the district of Castelnuovo Garfagnana from 1883, the "Dizionario pratico di agricoltura, giardinaggio ed industrie agrarie" from 1932, etc.). There was definitely a sharp decrease in emmer production, especially after the second World War, together with the general change in the people's eating habits toward "richer" foods. At the end of the 1970s, the rediscovery of healthy, natural foods, connected with the Mediterranean diet, led to a new increase in emmer cultivation. Currently in Garfagnana there are approximately 80 - 90 farms producing emmer, cultivating an area of about 100 - 110 hectares, with an average annual total production of 200 tonnes of emmer "with the husk".

ACQUISITION: Farro della Garfagnana must be grown in suitable soils, poor in nutrients, at elevations between 300 and 1,000 meters above sea level. Sowing takes place in autumn, in accordance with traditional crop rotations (normally following pasture), on land which has been prepared beforehand, using seed in the husk coming from the local population of Triticum dicoccum. According to the normal customs of the area, Farro della Garfagnana production must be carried out with the use of chemical fertilizers, pesticides or herbicides; being a very hardy plant, the emmer grown using traditional methods is in fact an organic product. The emmer is harvested in summer, using the usual wheat harvester-threshers; during threshing the spikelets are detached completely from the rachis, without causing the caryopsis to come out of the glume and glumella (thus it is called "wheat with the husk"). The maximum allowable per hectare production is 2500 Kg of emmer in the husk. Before being used, the grains of emmer must be polished, i.e. the glumaceous covering and part of the pericarp must be removed. This operation was traditionally done using special grinding mills, and can now be done using simple machines which can be purchased by each individual producer. The yield after polishing is approximately 60-70% of the initial product, depending on the method used. Polished emmer in grains is traditionally used for making bean soup and other soups and savoury pies; it can also be ground for other uses (pastas, breads, biscuits, etc.).

LINK: The geographical link between emmer and the Garfagnana stems mainly from the fact that the local population of Triticum dicoccum, having been grown uninterruptedly from time immemorial in the area, is not only genetically adapted to the local environment (soils, climate, cultivation methods, etc.) but it also forms an indissoluble pair with it and has particular requisites which make it completely distinguishable from the emmer produced in other areas. The link between emmer and the Garfagnana also stems from the area's longstanding food and cooking traditions. The qualitative characteristics of Farro della Garfagnana have long been known and appreciated also in other areas, as proved by the trade with other regions, which also took place in the past.