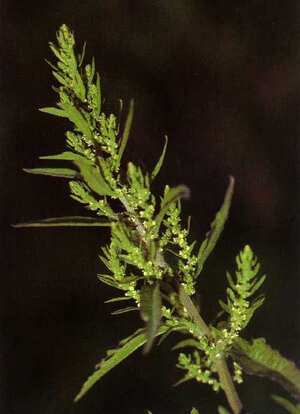 Epazote, Wormseed, Jesuit's Tea, Mexican Tea, or Herba Sancti Mariæ (Dysphania ambrosisoides, formerly Chenopodium ambrosioides) is a herb native to Central America, South America, and southern Mexico. It is an annual or short lived perennial plant, growing to 1.2 m tall, irregularly branched, with oblong-lanceolate leaves up to 12 cm long. The flowers are small and green, produced in a branched panicle at the apex of the stem.

As well as in its native areas, it is grown in warm temperate to subtropical areas of Europe and the United States (Missouri, New England, Eastern United States), sometimes becoming an invasive weed.

The common Spanish name, epazote is derived from the Nahuatl epazōtl, a compound word formed from epatl and tzotl meaning roughly "skunk smell."

Epazote is used as a leaf vegetable and herb for its pungent flavour. Raw, it has a resinous, medicinal pungency, similar to the liquorice taste of anise, fennel, or even tarragon, but stronger. Epazote fragrance is strong, but difficult to describe. It has been compared to citrus, petroleum, savory, mint and putty (linseed).

Although it is traditionally used with black beans for flavour and its carminative properties, it is also sometimes used to flavour other traditional Mexican dishes as well: it can be used to season quesadillas and sopes (especially those containing huitlacoche),soups, mole de olla, tamales with cheese and chile, chilaquiles, eggs and potatoes and enchiladas.

Where to buy epazote seeds