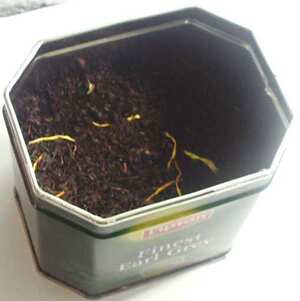 Earl Grey tea is a tea blend with a distinctive flavour and aroma derived from the addition of oil extracted from the rind of the bergamot orange, a fragrant citrus fruit.

Traditionally the term "Earl Grey" was applied only to black tea; however, today the term is also applied to green teas, including white tea and oolong, and tisanes, such as rooibos, that contain oil of bergamot. Because of Earl Grey's aroma and Twinings' distinctive packaging in England with Charles Grey, 2nd Earl Grey, the tea is sometimes called "Old Stinky".

The Earl Grey blend is named after the 2nd Earl Grey, British Prime Minister in the 1830s, who reputedly received a gift, probably a diplomatic perquisite, of tea flavoured with bergamot oil, taken from bergamot, a citrus fruit typical of southern Italy.

According to one legend, a grateful Chinese mandarin whose son was rescued from drowning by one of Lord Grey's men first presented the blend to the Earl. Given that this blend of tea was first made from fermented black Indian and Ceylon teas, there is reason to doubt this legend. Additionally, green tea is much more popular in China than black tea, making it unlikely that the Chinese would develop a recipe for what we now call Earl Grey. Finally, Lord Grey never set foot in China. However another version of the legend has the son of an Indian raja being rescued from a tiger by one of Grey's servants.

Jacksons of Piccadilly claim that it was they who originated Earl Grey's Tea, Lord Grey having given the recipe to Robert Jackson & Co. partner George Charlton in 1830; according to Jacksons the original recipe has been in constant production and has never left their hands. Theirs has been based on China tea since the beginning.