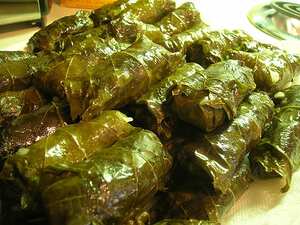 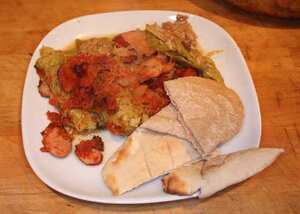 Dolma is a family of stuffed vegetable dishes in the cuisines of the former Ottoman Empire and surrounding regions, including Turkey, Egypt, Albania, Algeria, Azerbaijan, Armenia, Jordan, Syria, Lebanon, Palestine, the Balkans, Greece, Iraq, Iran and Central and South Asia. Perhaps the best known is the grape leaf dolma, which is more precisely called yaprak dolma or sarma. Common vegetables to stuff include zucchini, eggplant, tomato and pepper. The stuffing may or may not include meat. Meat dolma are generally served warm, often with sauce; meatless ones are generally served cold, though meatless Dolma are eaten both ways in Iran. Both are often eaten with yogurt.

Want to know how to prepare grape leaves?