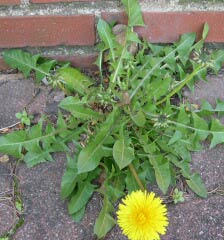 Taraxacum is a large genus of flowering plants in the family Asteraceae. They are native to Europe, North America and Asia and two species, T. officinale and T. erythrospermum, are found as weeds worldwide. The common name Dandelion is given to members of the genus and like other members of the Asteraceae family, they have very small flowers collected together into a composite flower head. Each single flower in a head is called a floret.

Dandelion leaves have been used by humans for food and herbalism for much of recorded history. The leaves are bitter, young leaves less-so. Because of the strong bitter flavour, they are often mixed with other less bitter leaves in salads.