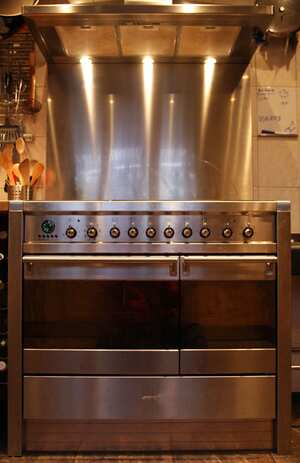 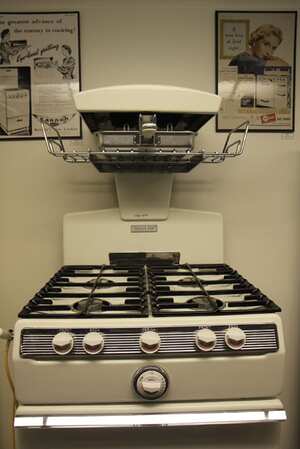 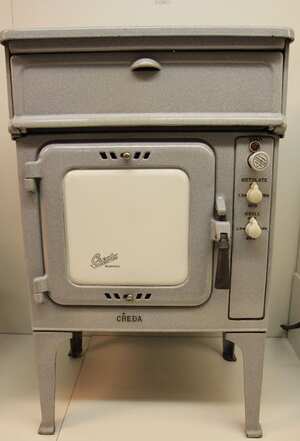 In culinary terms, an oven is an enclosed compartment for heating, roasting or baking.

In the past, cooking ovens were fuelled by wood or coal. Modern ovens are powered by gas or electricity. When an oven is contained in a complete stove, the fuel used for the oven may be the same as or different from the fuel used for the burners on top of the stove as in this Smeg dual-fuel cooker (dual-fuel: Gas hob & electric ovens), see photo.

Ovens can usually use a variety of methods to cook. The most common may be to heat the oven from below. This is commonly used for baking and roasting. The oven may also be able to heat from the top to provide grilling. In order to provide faster, more even cooking, convection ovens use a small fan to blow hot air around the cooking chamber. An oven may also provide an integrated rotisserie.

Steam ovens introduce water (in the form of steam) into the cooking chamber. This can aid the formation of a crisp crust on baked goods and prevent the drying out of fish and casseroles. The degree of humidity is usually selectable among at least several steps. Some steam ovens use water carried to the oven by the user in a container; others are permanently connected to the building's plumbing (water supply).

Ovens also vary in the way that they are controlled. The simplest ovens (for example, the AGA cooker - using gas, oil or wood as fuel) may not have any controls at all; the many ovens simply run continuously at various temperatures as they are different distances from the heat source. More conventional ovens have a simple thermostat which turns the oven on and off and selects the temperature at which it will operate. Set to the highest setting, this may also enable the broiler element. A timer may allow the oven to be turned on and off automatically at pre-set times. More-sophisticated ovens may have complex, computer-based controls allowing a wide variety of operating modes and special features including the use of a temperature probe to automatically shut the oven off when the food is completely cooked at its centre to the desired degree.

Some ovens provide various aids to cleaning. Continuous cleaning ovens have the oven chamber coated with a catalytic surface that helps break down (oxidise) food splatters and spills over time. Self-cleaning ovens use pyrolytic decomposition (extreme heat) to oxidise dirt. Steam ovens may provide a wet-soak cycle to loosen dirt, allowing easier manual removal. In the absence of any special methods, chemical oven cleaners are sometimes used - in the end, good old elbow grease and just lots of old-fashioned scrubbing is required.

Most recipes give cooking times for normal ovens. For fan assisted ovens, use a setting of 25° Celsius (77° Fahrenheit) less than that shown. Cooking times can probably be reduced by 10 minutes for every hour of cooking time.

For fan assisted ovens, use a setting of 20° Celsius (36° Fahrenheit) less than the 'normal' recipe calls for. Cooking times can probably be reduced by 10 minutes for every hour of cooking time.

The fan oven temperatures on the right are the equivalent to all of the left hand values.

We also have a dynamic meat cooking time calculator here.