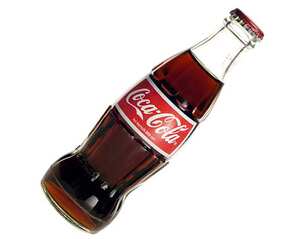 Cola is a sweet, carbonated drink usually with caramel colouring and containing caffeine.

Originally invented by the druggist John Pemberton, it has become popular worldwide. Coca-Cola and Pepsi have become the major international brands, leading to the drink often being seen as a symbol of the United States.

Despite the name, the primary flavouring ingredients in a cola drink are sugar, citrus oils (orange, lime, or lemon fruit peel), cinnamon, vanilla, and an acidic flavourant. Many different manufacturers of cola drinks add other trace ingredients to the drink in addition to these flavourings in order to create distinctively different tastes for each brand. Trace flavourings may include nutmeg, lavender, and a wide variety of ingredients, but the base flavourings that most people identify with a cola taste remain vanilla and cinnamon. Kola nuts, which have a bitter taste, contribute little or no flavour to most cola recipes. Acidity is often provided by phosphoric acid, sometimes accompanied by citric or other isolated acids.

Inexpensive colas may contain only vanilla and cinnamon as flavourings, which provide a simple cola taste. Many cola drink recipes are closely-guarded secrets of their manufacturers, with the recipe used by Coca-Cola being perhaps the most famous in this respect.