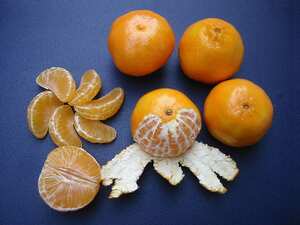 A clementine is a variety of mandarin orange (Citrus reticulata), named in 1902. The exterior is a deep orange colour with a smooth, glossy appearance. Clementines separate easily into eight to fourteen juicy segments. They are very easy to peel, like a tangerine, but lack the tangerine's seeds. Clementines are also known as seedless tangerines, although occasionally they do contain a few seeds.

The traditional story is that it was "originally an accidental hybrid said to have been discovered by Father Clément Rodier in the garden of his orphanage in Misserghin, Algeria." However, there are claims it originated in China much earlier. James Saunt writes: "Some authorities believe it is virtually identical to the variety known as the Canton mandarin widely grown in Guangxi and Guangdong Provinces in China."

Clementines lose their desirable seedless characteristic when bees cross-pollinate them with other fruit. In early 2006 large growers such as Paramount Citrus in California threatened to sue local beekeepers for their bees' trespass into clementine crop land. Clementines are typically shipped in small wooden or cardboard boxes with a move in recent years to net bags.

Removing the wax coating from clementines

Here are a couple of methods that you can use to remove wax from a clementine:

How much does one cup of clementine flesh weigh?

Clementines are at their best and in season during the following months: December & January.