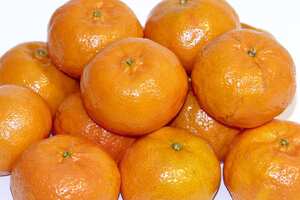 The Mandarin orange is but one variety of the orange family. The mandarin has many names, some of which actually refer to crosses between the mandarin and another citrus fruit. Most canned mandarins are of the satsuma variety, of which there are over 200 cultivars. Satsumas are known as mikan in Japan (derived from migan in Chinese). One of the more well-known satsuma cultivars is the "Owari", which ripens during the late fall season in the Northern Hemisphere. Clementines, however, have displaced satsumas in many markets, and are becoming the most important commercial mandarin variety.

The tangor, which is also called the temple orange, is a cross between the mandarin and the common orange. Its thick rind is easy to peel; and its bright orange pulp is sweet, full-flavoured, and tart.

Removing the wax coating from a mandarin orange

Here are a couple of methods that you can use to remove wax from mandarin oranges:

How much does one cup of mandarin orange flesh weigh?