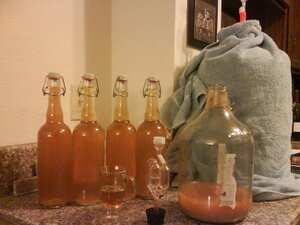 Applejack is a strong alcoholic beverage produced from apples, originating from the American colonial period. It is made by concentrating hard cider, either by the traditional method of freeze distillation, or by true evaporative distillation. The term "applejack" derives from "jacking", a term for freeze distillation.

Known as "Jersey Lightning", applejack's long history in New Jersey includes once being used as currency to pay road construction crews during the colonial period.

Around 1760, George Washington discovered this unique beverage, asked for and received the Laird family recipe and soon introduced Applejack to the Virginia Colony.

From the fermented juice, with an alcohol content of less than ten percent, the concentrated result contains thirty to forty percent alcohol, is slightly sweet, and usually tastes and smells of apples. Freeze distilling concentrates all of the alcohol by products of fermentation including ethanol, methanol and fusel alcohols. Distillation by evaporation can separate these as they have different boiling points. Due to the relatively higher cost and lower yield of alcohol produced from fruit fermentation, commercially produced applejack may be composed of apple brandy diluted with grain spirits until the drink reaches the desired alcohol content.

The oldest distillery in America is Scobeyville, New Jersey's Laird & Co., a producer of applejack (This is the same Laird family from which George Washington received his recipe). The "Apple Jack" that Laird & Company produces is an apple brandy, produced by distillation by evaporation and blended with neutral spirits.

Applejack may also refer to a cocktail made with apple liqueur and Jack Daniel's whiskey.