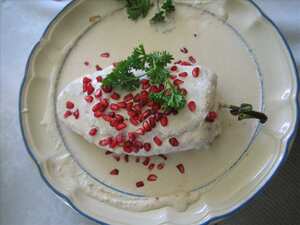 Chiles en nogada is an elaborate dish from Mexican cuisine. The name comes from the Spanish word for the walnut tree, nogal. It consists of poblano chiles filled with "picadillo" (a mixture usually containing chopped or ground meat, aromatics, fruits, and spices) topped with a walnut-based cream sauce and pomegranate seeds, giving it the three colours of the Mexican flag (red, green, and white).

The recipe is said to have been concocted by the grateful people of Puebla, who were giving a banquet in honor of Don Agustin de Iturbide's saint's day, August 28 in 1821. He and his followers had led the final revolt against Spanish domination; as self-proclaimed emperor he had just signed the Treaty of Cordoba. All the dishes at the banquet were concocted of ingredients of the colour of the Mexican flag; in this dish were the green chilies, the white sauce, and the red pomegranate seeds.

(From Diana Kennedy's The Cuisines of Mexico).