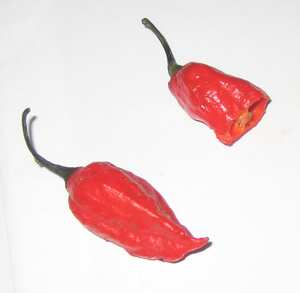 The bhut jolokia (English: king cobra chile) – also known as naga jolokia, Dorset naga, naga morich, or ghost chili – is a chili pepper. In 2007, it was confirmed by Guinness World Records to be the hottest chili in the world, replacing the Red Savina. It is a naturally occurring inter-specific hybrid originating in the Assam region of northeastern India. It also grows in the Indian states of Nagaland and Manipur.

In 2000, scientists at India's Defence Research Laboratory (DRL) reported a rating of 855,000 units on the Scoville scale, and in 2004 an Indian company obtained a rating of 1,041,427 units through HPLC analysis. This makes it almost twice as hot as the Red Savina pepper, Guinness World Record holder at that time. For comparison, Tabasco red pepper sauce rates at 2,500-5,000, and pure capsaicin (the chemical responsible for the pungency of pepper plants) rates at 15,000,000–16,000,000 Scoville units.

The pepper is used as a spice in food or eaten alone. One seed from a bhut jolokia can produce sustained intense pain sensations in the mouth for up to 30 minutes before subsiding. Extreme care should be taken when ingesting the pepper and its seeds, so as to not get it in the eyes. It is used as a cure for stomach ailments. It is also used as a remedy to summer heat, presumably by inducing perspiration. In northeastern India, the peppers are smeared on fences or used in smoke bombs as a safety precaution to keep wild elephants at a distance.