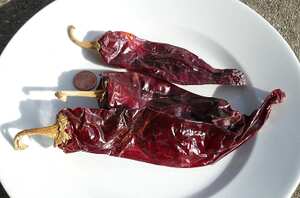 The Anaheim pepper is a mild variety of chile pepper. The name "Anaheim" derives from a farmer named Emilio Ortega who brought the seeds to the Anaheim area in the early 1900s. They are also called California chile or Magdalena, and dried as chile seco del norte.

The chile "heat" of Anaheims typically ranges from 500 to 2,500 on the Scoville scale however, many varieties grown inside of New Mexico can reach 4,500 to 5,000 Scoville units.

New Mexican cultivars were developed in the state by Dr. Fabian Garcia about 100 years ago. These cultivars are "hotter" than others in order to suit the tastes of New Mexicans in their traditional foods.

This chili is used in many Mexican dishes. peppers+recipe Find recipes that contain 'Anaheim peppers'