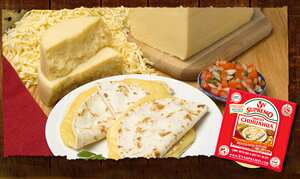 In Chihuahua, it is called queso menonita, after the Mennonite communities of northern Mexico that first produced it, while elsewhere it is called queso chihuahua. This cheese is now made by both Mennonites and non-Mennonites throughout the state and is popular all over the country. Queso Chihuahua is good for melting, and is similar to a mild, white cheddar or Monterey Jack. It may be used in queso fundido (fondue style melted cheese), choriqueso, quesadillas, chilaquiles, chili con queso, or sauces