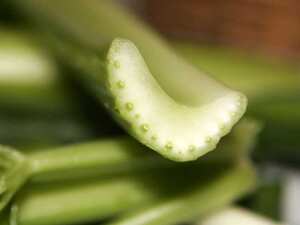 Celery Salt is used as a seasoning, in cocktails (notably to enhance the flavour of Bloody Mary cocktails), on the Chicago-style hot dog, and in Old Bay Seasoning.

A bunch of celery consists of 8 or so stalks, celery hearts refer to the innermost, tender stalks

Because of the requirement to earth up celery, it can be a bit of a fiddle to grow at home, however, a neat cheat is to grow cutting celery which looks like parsley, has the flavour of celery and can be grown on a window sill. 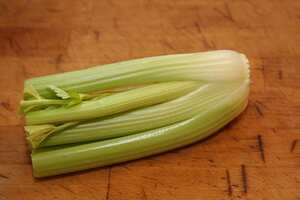 Keeping whole celery in the fridge and pruning what you need from the leaf-end means it keeps for more than 2 weeks. This piece is 17 days old.

Don't buy pre-cut sticks of celery, they dry out and go limp in days. Buy a complete bunch with the stems joined at the base. Bought in this manner, celery will stay crispy (in the fridge) for two weeks. If you can also buy celery with the leaves, they are a great way of easily adding flavour to a dish.

If you buy celery that is joined at the base and prune the part you need from the top (leaf-end) then it stays amazingly fresh for weeks if refrigerated. The celery in the photo is 17 days old. If you do need whole stems, they can still be snapped from the base.

if you have celery that is reaching the end of its useful life, slice it into moons, bag it up and freeze it. It loses its rigidity when defrosted but it will be fine for stocks and soups. Even batter if you can vacuum seal it first.

How much does one cup of celery weigh?

Celery is at its best and in season during the following months: October, November, December, January, February & March.