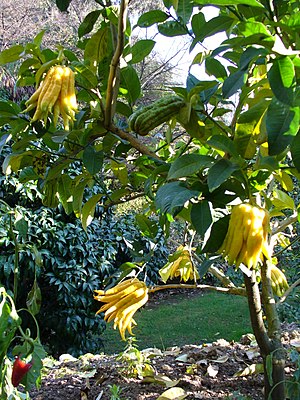 The Buddha's hand, fingered citron, (Citrus medica var. sarcodactylis) is a strange shaped citron variety with fruit is segmented into finger-like segments, approximating a human's hand. In Japanese it is named bushukan (ブッシュカン).

It probably originated from the Far East, northeastern India or China, where most domesticated citrus fruits also originate. it is widely cultivated in China, Japan, Indo-China, and India. The plant is sensitive to frost, as well as intense heat and drought. It grows best in a temperate climate. Areas such as the coast of Southern California as well as inland valleys are considered ideal for planting.

The fruit may be given as a religious offering in Buddhist temples. According to tradition, Buddha prefers the "fingers" of the fruit to be in a position where they resemble a closed rather than open hand, as closed hands symbolize to Buddha the act of prayer. In China, the Buddha’s hand fruit is a symbol of happiness, longevity and good fortune. It is also a traditional temple offering and a New Year’s gift.