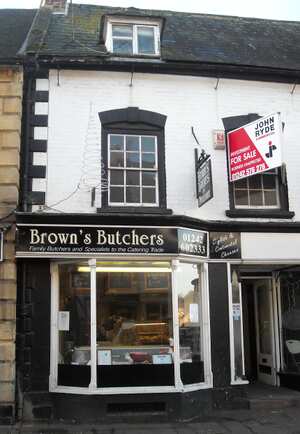 What I like about Brown's is that all of their pork is produced from the Gloucester Old Spot variety of pig and is supplied to them by Sudeley Hill Farm. They also sell a wide range of game out of season! No, they are not doing anything illegal because it is caught in season and then frozen. Naturally, it isn't the same as fresh, but it is nice to have that option. They can also obtain more unusual types of meat, such as goat, upon request and will also supply pig's blood and sausage skins should you wish to make your own black pudding and sausages. You can also buy cured meats and sausages such as chorizo.

They also have a wide selection of cheese - mostly British, but also a few continental ones. The cheeses are rather haphazardly arranged (unlike the meat), but don't let that put you off as they do have a good selection to choose from. A rather quaint touch to the shop is that everything is weighed in pounds and ounces, rather than metric.