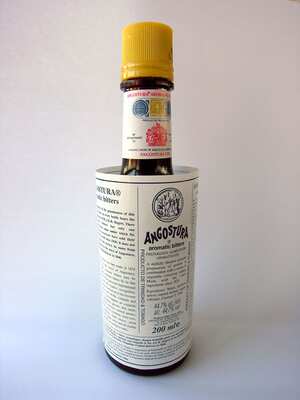 A bitters is an alcoholic beverage prepared with herbs and citrus dissolved in alcohol or glycerine and having a bitter or bittersweet flavour. There are numerous brands of bitters, which were formerly marketed as patent medicines but are now drunk as digestifs.

Bitters are principally used as digestifs and as flavourings in cocktails. While bitters commonly have an alcoholic strength of up to 45%, they are normally consumed in small amounts, added as a flavouring agent (similar to vanilla flavouring which is also dissolved in alcohol.) In the United Kingdom angostura bitters are not classified as alcoholic beverages due to their bitter taste and can be bought by a person of any age.

Common ingredients in bitters include angostura bark, cascarilla, cassia, gentian, orange peel, and quinine. The flavour of both Angostura bitters and Peychaud's Bitters derives primarily from gentian, a bitter herb. Bitters are prepared by infusion or distillation, using aromatic herbs, bark, roots, and/or fruit for their flavour and medicinal properties.

Angostura bitters was first compounded in Venezuela in 1824 by a German physician, who intended it as a remedy for stomach maladies. It was exported to England and to Trinidad, where it came to be used in a number of cocktails, following its medicinal use by the British Royal Navy in Pink Gin. Angostura and similar gentian bitters can be of some value for settling a mild case of nausea. It is used to stimulate the appetite, either for food or for cocktails. Used in both apéritifs and digestifs, it will settle one's stomach before a meal or before a night of drinking.

Used as the "starter" ingredient in a Pink Gin, where a splash (or two) of Angostura Bitters is swirled around the inner surface of a tumbler before adding a generous measure of London Gin. The resulting drink is so named from the colour imparted by the Bitters. In addition to the options of drinking a Pink straight, it may also be consumed with a little water, still or sparkling. Real connoisseurs of the Pink Gin even have preference for drinking it "in" or "out" - referring to whether the remaining dribble of Bitters (after the glass has been "pinked") is left in or poured away, before the Gin is added.

A large tumbler, similarly "pinked", and filled with sparkling lemonade, results in a drink known as a Campbell. This is regarded by some as a pleasant and refreshing way to relieve a little of the sweetness of lemonade, the same drink with added lime cordial is called "lemon, lime and bitters" in Australia, and is available both as a mixed drink in bars and as a ready-made bottled soft drink.

Peychaud's Bitters is associated with New Orleans, Louisiana, and the Sazerac cocktail. It, too, is a gentian based bitters, with a subtly different and sweeter taste than the Angostura brand.

Medicinal quantities of quinine were occasionally used in old cocktail recipes. Quinine is still found in much lower concentrations in tonic water, used today mostly in drinks with gin.