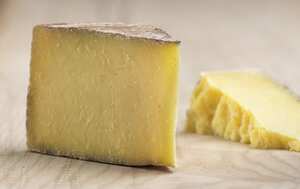 Birdwood Forester is an organic, unpasteurised, Shorthorn cows’ milk cheese made by Melissa Ravenhill of Woefuldane Farm, Minchinhampton near Stroud. It is named in honour of the Forest of Dean and Birdwood House Farm near Huntley where Melissa originally produced it.

The full-flavoured, farmhouse cheese is based on an old Forest of Dean recipe. It is a Cheddar type developed to reflect the rustic nature of the Forest of Dean in which Birdwood House Farm is located.

The cheese, which is suitable for vegetarians, is only available at the farmer’s markets in Gloucester, Stroud, Cirencester and Cheltenham and a few local shops. However, you can buy the cheese by mail order, directly from the farm.