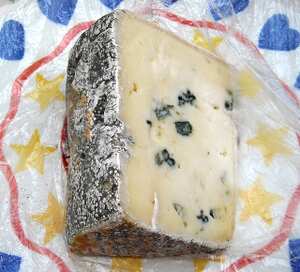 Notes: This artisan cheese is made by Catherine Temple of Mrs Temple’s Cheeses, using vegetarian rennet and milk from their own herd of British Holstein cows, which graze in North Norfolk near Wells-next-the-Sea. The cheese takes its name from a coastal village in the area.

Binham Blue is a semi-soft cheese, made with pasteurised milk. The interior is pale yellow, with grey-blue specks. It has a creamy texture and a tasty and luxurious flavour which is not overwhelming, but full of character. It is more like Gorgonzola than Stilton. It has a coarse, rough, orange-grey rind with some powdery spots.

The cheese won a Bronze Award at the British Cheese Awards in 2004.