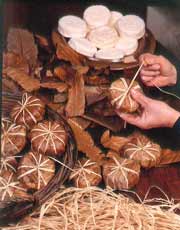 Banon is an AOP French cheese made in the region around the town of Banon in Provence, south-east France.

Also known as Banon à la feuille, it is an unpasteurised cheese made from goat's milk and is circular in shape, around 7 cm in diameter and 2.5 cm in height, and weighing around 100 g. This pungent uncooked, unpressed cheese consists of a fine soft white pâte that is wrapped in chestnut leaves and tied with raffia prior to shipping.

The Provençal speciality fromage fort du Mont Ventoux is made by placing a young banon in an earthenware jar. The cheese is then seasoned with salt and pepper, doused in vinegar and eau-de-vie and left in a cool cellar to ferment. The concoction will last for many years becoming increasingly fierce in taste.

Small goats' milk cheeses have been made in the dry hills of Provence since Roman times. As it is sold today, the cheese was first made by a couple in the village of Puimichel near to the town of Banon in the département of Alpes-de-Haute-Provence.

The affinage period lasts for two weeks, following which it is dipped in eau de vie and wrapped in chestnut leaves that have been softened and sterilised by boiling in a mixture of water and vinegar. The cheese is at its best when made between spring and autumn.

Banon was awarded the Appellation d'Origine Contrôlée (AOC) label in 2003.

If the Banon cheese is not listed below, select a similar type of cheese from the list below to get a rough idea for the number of calories in Banon cheese.