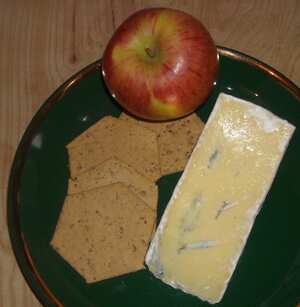 Ballyblue is made at Fivemiletown Creamery in the Clogher Valley in Co. Tyrone, Northern Ireland. It was one of the first blue cheeses to be developed on the island of Ireland. It is an artisan cheese made with pasteurised cows' milk and vegetarian rennet and is a Brie type cheese. The milk is supplied by William Crawford of Ardmore House Farm where he cares for his Holstein cows.

The cheese is straw coloured with a touch of blue veining and has a semi-soft and smooth texture. With a bloomy white rind, it has a creamy flavour which is slightly piquant due to the veining. It has a mild aroma and is an ideal introduction to stronger blue cheeses. It is produced in wedges of 142g and is matured for 3-4 weeks. It has a fat to dry matter content of 45%.

It is ideal to use in cooking, in sandwiches and on cheeseboards with biscuits.