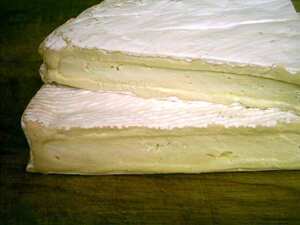 Brie is a soft cows' milk cheese named after Brie, the French province in which it originated (roughly corresponding to the modern département of Seine-et-Marne). It is pale in colour with a slight greyish tinge under crusty white mould; very soft and savoury with a hint of ammonia. The white mouldy rind is edible, and is not intended to be separated from the cheese during consumption.

If left to mature for longer, typically several months to a year, the cheese becomes stronger in flavour, the pâte drier and darker, and the rind also darker and crumbly, and is called Brie Noir (French: Black Brie). Over-ripe brie contains an unpleasant, excessive amount of ammonia, which is produced by the same microorganisms required for ripening.

If the Brie cheese is not listed below, select a similar type of cheese from the list below to get a rough idea for the number of calories in Brie cheese.