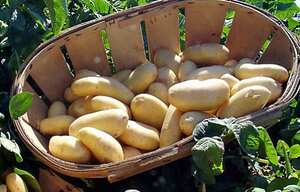 The AOP‘Béa du Roussillon’ is an early potato, i.e. harvested before reaching full maturity, and sold fresh. It comes exclusively from the Béa potato variety. The ‘Béa du Roussillon’ is oblong and elongated in shape, as well as smooth and even. The delicateness of its waxy, smooth, light-yellow skin gives it a flaky rather than peeled appearance. It has light-yellow coloured flesh. In terms of taste, it has an intense aroma of early season vegetables. It typically tastes mildly sweet and exhibits intense aromas reminiscent of early season vegetables (artichokes, peas and broad beans). It has a melt-in-the-mouth texture. The ‘Béa du Roussillon’ is between 17 mm and 65 mm in size and has a dry matter content of less than 20 % at time of packaging. The potatoes are put on the market from 1 May until 31 July following harvesting.

The potatoes are pre-germinated, cultivated, washed, sorted and packaged in their geographical area of production, which covers the following municipalities on the plain of Rousillon (in the Department of Pyrénées Orientales): Alénya, Argelès-sur-Mer, Baho, Bompas, Canet, Corneilla-la-Rivière, Elne, LatourBas-Elne, Le Soler, Ortaffa, Palau-del-Vidre, Perpignan, Pezilla-la-Rivière, Pia, Saint-Cyprien, Saint-Estève, Sainte-Marie, Saleilles, Théza, Torreilles, Villelongue-de-la-Salanque and Villeneuve-de-la-Rivière. The geographical area has a typically Mediterranean climate and lies on alluvial terraces of the late Quaternary period; it has a permeable sub-soil and distinctive landscapes formed as a result of human activity. The potatoes are harvested in the geographical area of production, in an area broken down into plots or subplots. This is an area of 5 500 hectares across the 22 municipalities of the geographical area of the designation of origin ‘Béa du Roussillon’. The patchwork of plots making up the area has been marked on cadastral maps lodged with the local authorities of the municipalities concerned.

The production cycle lasts for at most 100 days. Haulm stripping before harvesting is prohibited. Crushing of the potato vines is permitted, but only on the day of harvest. Harvesting on a plot begins when 70 % of the potatoes are between 28 and 55 mm in size. Harvesting is done by hand or with the help of potato harvesters conforming to well-defined criteria aimed at preserving the integrity of the potato and especially limiting the number of bruises and falls. The potatoes are placed manually into boxes with a maximum capacity of 30 kg and delivered the same day to the collecting, washing, sorting and packaging stations. The maximum allowable yield is 30 net tonnes per hectare. Washing, sorting and packaging must take place in the area of production of the ‘Béa du Roussillon’, so as to preserve the quality and characteristics of this fresh and fragile vegetable which is particularly shock- and light-sensitive (resulting in sun scorch and rapid greening). Therefore, in order to preserve the flaky but unpeeled appearance of the ‘Béa du Roussillon’, it is packaged within 24 hours of harvesting. This means that the prior operations of washing and sorting must themselves be performed within a short period of time. Washing the potatoes at the edge of the field is prohibited. Washing, sorting and packaging the potatoes involves applying local skills using machines (for washing, sorting and packaging the potatoes) specially adapted to the product. The purpose of using these machines is to prevent any bruising of the potatoes. In this way the potatoes do not fall more than 50 cm throughout the process. If they do have to fall more than 30 cm, the potatoes are protected by a flap or they fall onto a soft mat. Once sorted, the ‘Béa du Roussillon’ is: — whole, i.e. free of any ablation or damage affecting its integrity, — sound, — firm, — free from splits, i.e. it does not have any growth cracks, — practically clean, free of any visible foreign matter, especially attached soil, — free of heat or frost damage, — free of green discoloration, — free of serious internal defects, — free of abnormal external moisture, — free of any abnormal taste and/or smell. Apart from helping to preserve the quality and characteristics of the product, packaging the potatoes in the geographical area helps strengthen the capacity to ensure their traceability.

Owing to irrigation systems established by the Visigoths and the drainage of swamps by the Moors, hortas (gardens) were established very early on in Roussillon. The potato was first planted in the area in the 18th century and covered 500 ha by 1855. In this region, which is conducive to the growth of early season vegetables because of its semi-arid Mediterranean climate, the Béa variety became predominant from the time of its listing in 1954. Today this is the only basin (in all of France, Italy and Spain) where this variety is available as an early potato. The soils used for growing ‘Béa du Roussillon’ are easily identifiable. They are alluvial soils overlying stony terraces. They are poorly developed, deep, permeable, with a loamy or sandy texture, very pliable and well-drained. They are free of rocks and gravel, which permits the potatoes to develop harmoniously. Along with the climatic conditions, these soils give the ‘Béa du Roussillon’ its distinctive visual characteristics: long, flat, smooth, pale yellow and waxy. There is sufficient evidence to show that in soils with a different structure, the characteristics of the potatoes are very different (they are rough-skinned and rounder).

The ‘Béa du Roussillon’ benefits from a strictly Mediterranean climate, i.e. semi-arid, with a very marked dry season. The average temperature is 15 to 16 °C, with very hot summers and an average of 2 530 hours of sunshine per year. Rainfall is generally low (between 550 and 650 mm), but varies considerably depending on the year, and is often associated with thunderstorms. With its unique exposure to sunlight, mild winters and hot summers (which are nonetheless tempered by proximity to the sea), this set of natural conditions allows the potato plants to develop harmoniously and smoothly. The Tramontane wind, which blows in Roussillon on one day out of three and is often strong, could have been construed as a handicap, but it actually has a beneficial effect on the crop, restricting the development of cryptogamic diseases which are deleterious to the shape and smooth and uniform character of the ‘Béa du Roussillon’. Human knowledge has also been instrumental in limiting the impact of these diseases: to combat its direct effects (stem break), densities are high to establish a critical mass, and the plots are very fragmented, with hedgerows planted as windbreaks. Indeed, the sprouts are very fragile during the first growth phase, although once the plants are well-established they cope better with wind than other varieties, having thick stems and leaves which are more resistant to abrasion. The resulting landscape is very distinctive, made up of small plots, high hedgerows and an ancient system of channels for water supply and removal. The landscape, without remaining static, changes very little and only with great care being taken. Changing the landscape would mean that cultivation of the ‘Béa du Roussillon’ would have to be abandoned.

In terms of cultivation, pre-germination is essential for the preservation and development of numerous sprouts. Planting is done by hand, with the number of sprouts determining the planting density. The density is high to mitigate the effect of the wind. Furrow irrigation is being superseded by spray irrigation, which uses water more efficiently. The producers’s skills are also evident at harvest time. The producers have invented potato harvesters adapted to the fragility of the Béa which extract the potato along with a bed of earth, as opposed to classic potato harvesters which remove as much earth as possible from the potato without taking due care of the potato itself. The producers’ method helps protect the fragile potato from shocks, as it has a very thin skin. The harvesters operate very slowly and are labour-intensive to operate, as each potato is placed in its container by hand. This also applies to washing, sorting and packaging operations in which the potatoes are protected from shocks by individual plastic or rubber chutes or flaps when they fall from a limited height, and rather than being packaged in traditional bags or netting, they are placed in rigid containers of a capacity not exceeding 15 kg to preserve their integrity. The analytical, visual and taste characteristics of the ‘Béa du Roussillon’ are linked to the land in which it is produced and its producers’s skills.

The sensory analyses carried out between 1995 and 2004 clearly showed that, on the one hand, the distinctive characteristics of the ‘Béa du Roussillon’ had remained stable over the years and, on the other hand, the same variety of potato produced elsewhere did not possess the same characteristics. Visually, potatoes of the same variety grown elswhere are thick, rounder, rough in appearance and a darker shade of yellow. The aromas of early season vegetables are missing or much less intense and conflict with the dominant smoky and burnt taste and smells. The maximum dry matter content of the ‘Béa du Roussillon’ may seem relatively high in comparison to that attained in other production basins, but there are many reasons for this: first of all the Mediterranean climate, with its low precipitation, strong sunlight (especially in spring, the potato’s growing period, and summer, when it matures), rainfall (typically rainstorms, often significant in spring) followed by strong sunshine and high temperatures, and secondly, the length of the cycle. As the season progresses, and as with cycles of nearly 100 days, the dry matter content increases to nearly 20 % without affecting the quality of the product. However, above this threshold, the skin becomes thicker and the potato loses the characteristics of an early season vegetable. Indeed, sensory analyses have shown that the characteristics of the ‘Béa du Roussillon’ are preserved and persist if the dry matter content is less than 20 % (especially as regards melt-in-the mouth texture and aromas of early season vegetables).

It is the combination of soils, climate and skills as a whole that has contributed towards the reputation of the ‘Béa du Roussillon’. It has an established reputation both among professional users and ordinary consumers. The arrival of the ‘Béa du Roussillon’ on the market is much anticipated and it overtakes other locally sold early season varieties as soon as it arrives. Since the middle of the 1950s and still today, many articles in the local, regional and national press make reference to this typical local product, which is closely associated with its region of origin.