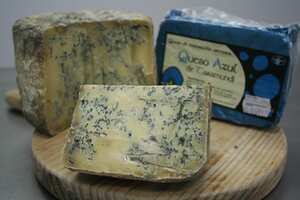 Azul de Taramundi is a semi-soft, blue, unpasteurised cows' milk cheese produced by the Sociedad Cooperativa Eo Leche, R.L, which was created in 1987 by a group of dairy farmers, in order to integrate and defend the sale of unpasteurised milk to the industry. Currently the group consists of 41 dairy cow partners and 4 goats' milk partners.

The cheese, which is matured for 3 months, has an open texture, with reasonably uniform streaks of blue mould, which gives it a slightly spicy, salty and lactic flavour. Its consistency can be semi-hard and crumbly or semi-soft and doughy. Although its strength is medium to strong, this cheese is one of the mildest of Asturian blues and has a soft, yet persistent flavour. It has a natural, mouldy rind.