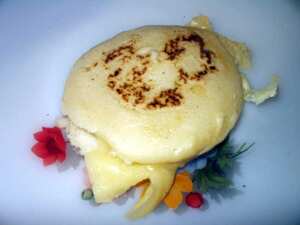 The arepa is a flat cornmeal patty which is grilled, baked, or fried. The characteristics of the arepa vary with local culture. For example, in Colombia, the colour, flavour, size, thickness, and garniture may vary from region to region. They may be stuffed with cheese, vegetables, or any other desired stuffing.

In Eastern Venezuela, besides the most common variety of 3 to 5 inches (130 mm) in diameter and half an inch thick, you can find larger arepas 8 inches (200 mm) in diameter and two inches thick, made with either white or yellow corn. In the Andean West, you may find flat arepas, which are a quarter of an inch or less in thickness and 3 to 4 inches (100 mm) in diameter. An arepa is often eaten as a sandwich; it is split in half and filled with cheese, deli meats, or other fillings, in which case it is called arepa rellena or a Venezuelan "tostada", although the latter term is not in common use anymore. An arepa is also sometimes dressed with toppings and eaten open-faced.

On the Caribbean coast of South America, the arepa-like cornmeal cake is often deep-fried and, in one variation, where a raw egg is added midway through the frying process, it becomes the arepa ´e huevo. This latter variation was most likely devised by the African slaves near Cartagena de Indias.

There are two ways to make the dough: the original, highly laborious method requires the maize grains to be soaked, then they are peeled and ground, this is done by pounding the grains in a larger mortar (pilón) to remove the pericarp and the seed germ, only the cotyledons of the maize seed are used to make the dough, this product (mortared maize or "maíz pilado") was normally sold as dry grain which were then boiled and ground into the dough.

The second, easier, and most popular method today is to buy pre cooked corn in a dry flour form, specially prepared for making arepa and many other maize based dough dishes (hallacas, bollos, tamales, empanadas, chicha, etc.). The most popular brand name of corn flour in Venezuela is Harina P.A.N., and in Colombia is Areparina; it's usually made from white corn but there are yellow corn varieties available. This product was invented in the 1950s by Dr. Caballero Mejias, a Venezuelan engineer who used the profits from his patent to finance a Technical Schools system. The precooked form was widely industrialized from there. The flour is mixed with water and salt (some people add oil, eggs and/or milk). After being molded by hand, or in a special mold, into a patty, the dough is fried, grilled or baked.

In some countries, like Venezuela, various kitchen appliance companies sell gadgets like the Tostyarepa, very similar to a waffle iron, which cooks arepas using two hot metallic surfaces clamped with the raw dough inside. In Venezuela, the arepa is traditionally grilled on a "budare", which is a flat originally non-metallic surface which may or may not have a handle on it. Arepas cooked this way are named "tostadas" (the plural form of "toasted"). Nowadays it's common to follow the grilling process which forms the "concha" or crust with 20 to 25 minutes in the oven at very high temperatures, very much like the ones used in broiling settings in North America. Normally an arepa takes fifteen to 25 minutes by side to be prepared in a regular grill; with the Tostyarepa, making arepas takes about seven minutes or less.