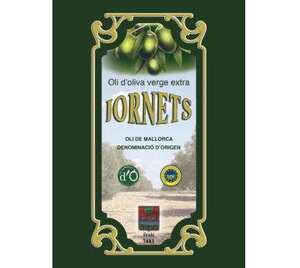 DOP Aceite de Mallorca aka Oli de Mallorca is a Spanish extra virgin olive oil obtained from the fruit Olea Europea L. belonging to the Majorca, or Empeltre, Arbequina and Picual varieties and produced by mechanical or other physical means that do not lead to alterations in the oil, preserving the aroma, flavour and characteristics of the fruit from which it is extracted.

The sensory profile of Majorcan olive oil has clearly differentiated characteristics. Two types of oil can be distinguished: fruity and sweet. In the organoleptic analysis of fruity oil, the almondy, sweet and fruity flavour of the olive predominates. The bitter or pungent attributes are moderate and there is no hint of astringency. The dominant feature of sweet oil is clearly its sweetness. Slightly if at all bitter or pungent, its fruity parameters (almondy, fruity flavour of olives, fruity flavour of other fruits, ripe green apples) are practically non-existent.

The colour of Majorcan olive oil ranges from golden to greenish yellow, depending mainly on the period the olives are harvested.

The area in which the olives are grown and the oil is processed extends across all the municipalities of the Island of Majorca, which belongs to the Autonomous Community of the Balearic Islands. The packaging area is the same as that for production and processing.

Olive-growing holdings on the Island of Majorca consist for the most part of mountain groves situated on hillside terraces, the latter being constructions typical of Majorca that enable the soil to be held in place and crops to be grown on rough terrain. Terracing allows rainwater to be used to maximum effect and helps contain erosion.

It is common in Majorca for olive cultivation to be combined with the rearing of Majorca-bred sheep, a practice which has the dual function of eliminating weeds and supplying organic fertiliser which provides trees with nutrients. Once the olives have reached the correct degree of ripeness they are picked by hand or using the methods of handpole-beating or vibration and are then transported in accordance with the requirements laid down to prevent damage to the fruit.

The olives are stored in purpose-built oil mills. Storage temperature may not exceed 25 °C. This factor and a limit on storage time prevent the olives from deteriorating before they are processed into oil. The maximum time that may elapse between harvesting and the extraction of oil from a batch of olives is 48 hours.

The fruits are cleaned and washed to remove leaves, stalks, earth and impurities and are then pressed in order to proceed with the extraction of the oil. This operation is carried out mechanically and involves the following: grinding of the olives, churning of the paste (maximum temperature: 28 °C), separation of the phases and storage. Once the production process is completed, the product obtained is evaluated and classified. Packaging must take place in the defined geographical area, as prescribed by the applicant group. It has to be undertaken in the defined geographical area for the following reasons:

Regulating Board for the Aceite de Mallorca designation of origin is confined to the defined geographical area, i.e. the island of Majorca. The Board's inspection and certification system guarantees the origin and traceability of Majorcan olive oil provided packaging is undertaken on the actual island and not outside the production area.

Since olive oil is a liquid product, the risk of it being blended with other substances (notably with olive oils from other areas) exists. Allowing a protected olive oil, therefore, to be packaged outside the defined geographical area would jeopardise its guarantee of origin.

packaging takes place in the defined geographical area is a decisive factor contributing to the quality of Majorcan olive oil and to preserving its special characteristics. It means that the tasks of applying and monitoring transport and packaging standards are assigned to producers and to members of the designation of origin's inspection body, i.e. individuals possessing the know-how and techniques to ensure that Majorca olive oil is correctly handled.

As Majorca is an island, transporting olive oil in bulk to areas outside the production zone involves lengthy sea crossings. Failure to preserve the final quality of Majorcan olive oil is therefore a risk factor, as the organoleptic characteristics of Majorcan olive oil, which set it apart from other oils, could be affected if transport did not take place in appropriate conditions.

There is a long-standing tradition of olive growing and olive oil production and consumption on the island of Majorca.

From as early as the 13th century, when the island formed part of the Kingdom of Aragon, there are references to olive growing in this area and to the production and export of olive oil. In the middle of the 15th century, Majorcan olive oil was being shipped from the island on a regular and ongoing basis, particularly to the south of France. The 16th century saw an expansion in olive cultivation and olive oil production, activities which were for a long time to remain the chief source of wealth of many Majorcan farms, a substantial number of which had their own mills.

Olive growing spread particularly to the northern areas of the island. At the beginning of the 16th century, tithes (taxes levied on the harvest) on olive oil accounted for 10 % of the total, a figure only exceeded in the case of wheat and barley. In the 17th, 18th and 19th centuries, Majorcan olive oil played a key role in the economy of the island, both as a basic ingredient in the islanders' diet and as a product for barter and export.

In one of the documents that best illustrates the customs and life on the Island of Majorca, entitled Die Baleren in Wort und Bild geschildert, written by the Archduke Luis Salvador of Austria during his stay on the island in the 19th century, the quality of Majorcan virgin olive oil is praised.

Formal recognition of the quality of Majorca virgin olive oil was to come in the second half of the 19th century. At the 1888 Barcelona World Exhibition, the silver medal was awarded by an international panel of judges to an olive oil from Majorca.

The references mentioned show the strong link that exists between Majorca and the manufacture of olive oil. They also indicate that Majorca's traditional groves are probably some five hundred years old, the trees having lasted through the centuries without any major diseases or fires having required them to be replaced as a whole. The olive tree, which is an integral part of the landscape, has such deep roots in Majorca that popular wisdom decrees that the trees are a thousand years old.

Soil characteristics, hilly relief, irregular rainfall and the great age of Majorcan trees are factors which contribute to a limited production of olives. The age of the trees confers a combination of characteristics to the oil made in Majorca, an oil which is different from that of other production areas. The weather conditions of the Island of Majorca determine when the olives are at their best for harvesting, which is earlier than in other olive-growing regions. All these factors combined, together with the varieties of olives found in Majorca, have resulted in oils with differing organoleptic characteristics: sweet, if obtained from olives turning colour, their most distinctive feature being sweetness or mildness, with the bitter and pungent attributes being practically non-existent; or fruity, if obtained from green olives, their sensory profile featuring the bitter and pungent attributes.

It should also be pointed out that olive growing in Majorca constitutes the main agricultural activity of certain regions, a case in point being the Serra de Tramuntana. Olive-growing has preserved and protected the environment, prevented desertification and erosion, and fashioned a landscape that is one of the most symbolic of the Island of Majorca.