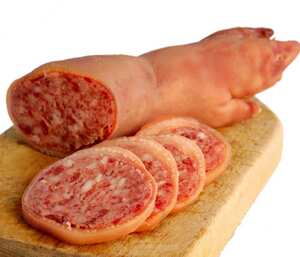 IGP Zampone Modena is an Italian processed pork product made of a pork mixture obtained from striated muscles, pig fat, pigskin and various seasonings, stuffed in natural casings made of the cutaneous covering of the front leg of the pig, including the distal phalanges, and tied at the upper end. The product must be easily sliced. When cut, the slice has a pinkish colour, tending toward a non-uniform red, and has a firm, even texture.

GEOGRAPHICAL AREA: The area of production includes the territory of the following Regions in Italy: Emilia-Romagna, Piedmont, Lombardy, Veneto, Marche, Tuscany and Latium, as well as the autonomous Region of Trento.

EVIDENCE OF ORIGIN: Zampone Modena owes its fame to the geographic origin of the places where it has traditionally been obtained. It is a sausage product of long-standing renown, which was originally made in Modena and later, with the handing down and spreading of the knowledge of the art of making these pure pork sausage products, it was also produced in other regions of central-northern Italy. The historical origins of the product go back to the beginning of the 1500s. The industriousness and technical skill traditionally handed down among the makers of Zampone Modena are essential elements of this product, whose characteristics still today influenced by environmental and human factors. The fame of Zampone Modena is confirmed by numerous testimonies in literature.

ACQUISITION: The production of Zampone Modena is carried out in the following stages: preparation of the raw materials, grinding, blending and stuffing, which is then followed by drying for the product sold fresh and by pre-cooking and suitable heat treatment for the product sold cooked.

LINK: The requirements for denomination of origin products depend on the natural and human factors of the production area. The environmental conditions of the defined area are those of the typical climate of central-northern Italy. The main connection with the traditional area of production is that of the technical skill of the workers, who over time have become highly qualified, making it possible to use entirely traditional production procedures . The traditions and environmental characteristics together are very closely linked to the socioeconomic development of the production area, such as to give it certain characteristics irreproducible elsewhere.