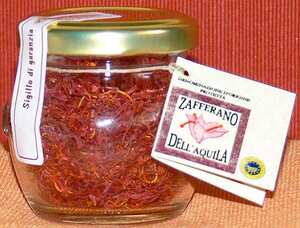 Zafferano dell'Aquila is a DOP saffron obtained by roasting stigmas of Crocus Sativus L. flowers (a corm of the iridaceae family, with red and purple flowers); saffron is marketed as threads or processed into powder.

The area of production of Zafferano dell'Aquila subject to these specifications covers the municipalities of: Barisciano, Caporciano, Fagnano Alto, Fontecchio, L'Aquila, Molina Aterno, Navelli, Poggio Picenze, Prata d'Ansidonia, San Demetrio nei Vestini, S. Pio delle Camere, Tione degli Abruzzi, Villa S. Angelo. The entire area is enclosed by the local authority boundaries of these municipalities. The flowers must be grown on land at an altitude of between 350 and 1 000 metres above sea level.

There are a number of historical documentary sources which provide a wealth of details on the production and marketing of saffron in the province of L'Aquila over the past 600 years or more. The changing fortunes of the area, with economic and urban development over the centuries of the town of L'Aquila itself, are closely linked to the availability of this product, which was such a safe investment in some historical periods that it came to be known as ‘red gold’.

Because of the importance of the saffron trade, L'Aquila attracted foreign merchants, especially from northern Europe, who settled there permanently, laying the foundations for flourishing economic activity and intense cultural interchange that contributed to the development of social and political relations between the local population and central and northern Europe.

Introducing protection for the DOP origin not only safeguards the unique commercial product against imitations and attempts to take advantage of the geographical name, but also protect the historic and cultural heritage of the area, which is still alive and well today, and reflected in horticulture, cooking, idiomatic expressions and popular events.

The fact that a protected designation of origin guarantees the origin of the product means that special procedures are required to ensure traceability at different stages of production. Producers of Zafferano dell'Aquila and plots on which it is grown is entered in a register kept by the control bodies.

The Crocus Sativus L. plant, from which the DOP saffron is obtained, is grown in accordance with the following practices, passed down by local tradition.

The soil is prepared by tilling to a depth of 30 cm and burying organic fertiliser, smoothing and levelling the surface, preparing hollows and furrows two to four rows wide, at a distance of 20 to 25 cm, for the new planting. It is prohibited to apply any other type of fertiliser in the course of the growing cycle.

The corms are gathered in the first fortnight in August and sorted; care is taken to select the largest healthy and pest-free ones; they are planted in the prepared plot with the growing tip uppermost in the second fortnight in August. Crops are rotated over a five-year period. Corms are planted in continuous rows, at a density of 500,000 to 600,000 (7 to 10 tonnes) per hectare. After planting, cultivation involves simple operations such as staking and digging. Chemical weedkillers are prohibited, watering is authorised only in periods of drought.

For over 800 years the Crocus sativus plant, from which saffron is obtained, has found an area propitious for its growth in the Navelli plain, the typical area for the production of L'Aquila saffron, located in the province of L'Aquila and ranging in height from 700 to 900 metres. This area has a soil and climate which give L'Aquila saffron its special features. In fact, it is grown in an area which is atypical and almost unsuitable for the biological and ecological characteristics of the plant. The cultivation of saffron in this province takes place on the lower slopes of mountains, between 350 and 1 000 metres, the highest of the areas around the Mediterranean where saffron is grown. The annual rainfall is about 700 mm, including over 40 mm in summer.

In the other areas around the Mediterranean where saffron is grown, rainfall is slight. Average summer temperatures in L'Aquila province do not exceed 20 °C to 22 °C. These features mean that the area may be regarded as having a temperate Mediterranean climate, almost resembling that of a wet plain.

The area where L'Aquila saffron is grown has a medium soil composed of humus and loam which retains water well while the high sand content makes it loose and aerated. There is a good proportion of active lime and a large amount of organic material; it is low in phosphates content and high in potassium. The chemical composition and looseness of the soil make the area particularly well-suited to the growing of L'Aquila saffron, which can easily be distinguished from other types of saffron.

Besides the soil and climate of its area of production, L'Aquila saffron owes its special features to agricultural practices going back several centuries which people have employed to enable saffron to survive in this area of rainy foothills. Over time, techniques have been devised to select the bulbs and an annual cultivation pattern developed. The typical cultivation technique for the production of L'Aquila saffron, whose main feature is its propagation system, ensures the survival of the species and further distinguishes the plant from similar varieties grown in other areas, both in Italy and elsewhere. The flowers are harvested exclusively by hand so as not to damage the stigmas they contain. These are then roasted, which is the most important stage in the production of L'Aquila saffron; the point of completion is determined solely by an expert whose techniques have been transmitted from generation to generation.

There is abundant documentary evidence that saffron was being grown in the province of L'Aquila in the 13th and 14th centuries. The lives of the local people were deeply marked by its growing economic importance and changing fortunes; trade with many different European regions was encouraged, as historical sources show.

Because of the biological features of the plant, which is a sterile triploid propagated only by division of the corms, only evolutionary change linked to gamete reproduction will modify its genetic character. To that extent, Zafferano dell’Aquila is a living fossil, since both the plant's botanical features and the growing techniques have remained unchanged for over 600 years. Consequently, the plants grown in the province of L'Aquila constitute a population, which we qualify as a cultivar or biotype, since the biological changes distinguishing them from other cultivars are exclusively due to the specific climatic and rainfall conditions in the area.