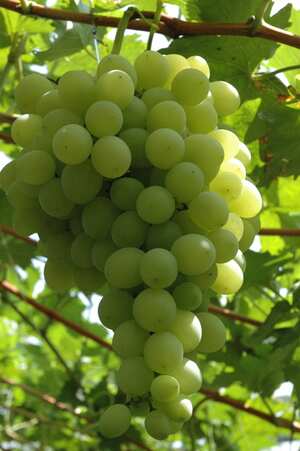 Westlandse druif is a BGA table grape, which is easy to digest and high in natural grape sugar, vitamins and minerals, is available in various colours and varieties, and is intended for direct consumption. In Westland several varieties of grapes are grown under glass. The grapes grow in large bunches and are round to oval in shape. The skin has a bloom — the clearest indication of a quality product — which should not be touched. The colour ranges from (deep) blue to white/green, according to the variety. Bunches weigh between 300 and 1,250 grams, averaging 500g. The flesh is juicy and firm, with a fresh, sweet taste. The fruit is sweet, with a distinctive aroma.

The geographical area of production is Westland, the western area of South Holland, comprising the following municipalities: Naaldwijk (Honselersdijk), 's-Gravenzande (Maasdijk), Maasland, De Lier, Monster (Poeldijk), Wateringen (Kwintsheul) and the Hoek van Holland. Most of the traditional glasshouses are located in Monster, Wateringen and Poeldijk. Cultivation in modern glasshouses is also possible.

The best quality grapes are produced in sandy and clay soil. Some areas in Westland are extremely well suited to grape-growing. The best Westland glasshouse grapes are marketed exclusively as regional products under their own label. In conjunction with the remaining growers, a unique product of exceptional quality and excellent taste is being promoted. In view of its rich history and past economic importance, the Westland table grape still makes an important contribution towards the image of Westland. It was partly for this reason that ‘De Westlandse druif’ Foundation was set up in May 1999 to preserve the cultivation of this precious, culturally and historically significant grape.

Cultivation was launched in Westland in the seventeenth century by local market gardeners, mainly through the efforts of Father Verburgh of Poeldijk. Output remained limited, however, assuming significant proportions only in the 19th century. Around 1716, early varieties were used for the most part. The practice of constructing greenhouses against walls began in the second half of the nineteenth century. Grapes were exported from 1830, leading to further expansion. South-facing walls were built so that the fruit could benefit from a maximum of sunshine and heat. From 1850 onwards, schwieterman (frames filled with small glass panes projecting from walls) were employed in order to safeguard crops to a greater extent. Lean-to greenhouses followed and in 1888 the first glasshouse with two glass walls was constructed. By 1880 the Netherlands had 180 000 metres of grape-growing walls and a number of lean-to glasshouses.

Cultivation in the open ceased altogether after 1900. The greatest expansion in the Netherlands occurred in the 1920s. In 1928 the Staten van Landbouw in het Koninkrijk Holland (State of Agriculture in the Kingdom of Holland) refers for the first time to Westland as a grape-growing centre and to exports from the area to England. Production peaked at 22,000,000 kg in 1936. After the war, many vines were grubbed up, mainly as a result of a sharp rise in cost prices and increasing competition from grapes grown in the open in southern countries. The production area declined sharply. The current area of glasshouse vines in the Netherlands is estimated at approximately 10 hectares. Contrary to the situation today, grape-growing used to be extremely important to the Westland economy. Up to the end of the Second World War, crops grown under glass mainly comprised greenhouse grapes. After 1940, production fell sharply as a result of the system of fixed prices and the higher profits to be derived from the cultivation of tomatoes. Production was continued on a small scale for and by enthusiasts of this excellent grape.

The grape-growers work entirely manually, for this is real craft production. Around two months before the grapes are ripe, bunches have to be thinned out. This is done when the grapes reach the size of a large pea. In this way, the quality and storage life of the grapes is enhanced. The glasshouses may be heated to enable the fruit to ripen by the month of June. Where no heating is used, the grapes can be ripe at the beginning of August. Harvesting goes on until the end of October. Some varieties, if chilled, may still be available in December. Grapes suitable for storage are frequently disposed of through dealers but the other varieties are sold at auction. A large proportion of the harvest is also sold directly to individuals or to specialist fruit and vegetable traders.